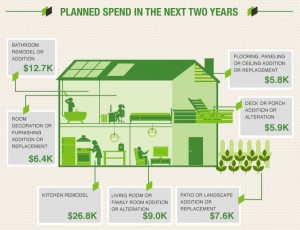 Does your home look the way you want it to?  Are you interested in making changes?  If you answered yes to the second question, you are not alone.

A recent survey of 29,127 respondents sponsored by Houzz, a premier home design and remodeling resource, has shown that aesthetics is ever increasing on the scale of importance to people who own homes.

In fact, 86 percent of homeowners slated to conduct remodels felt that “improving the look and feel of the space” was of prime importance. Only 47 percent were motivated by the idea of ”increasing home value.” The report also showed that homeowners are choosing to improve their homes and sacrificing other items like vacations to do so.

These survey results were a little surprising to Houzz, in light of current national economical statistics. “We expected that in this economy Americans’ highest priority would be increasing home value, but instead we found people are focused on pleasing themselves, not the next owner,” said Liza Hausman, Vice President of Marketing for Houzz. “Homes today are doing double or even triple duty as workplace, stay-cation, gym and more.”

Another interesting trend seen in the survey was that homeowners are not resorting to loans to do these improvements. 70 percent of those surveyed were interested in paying cash, doing improvements themselves, or realigning their budgets to make the changes happen in their homes. According to the survey, only 45 percent of homeowners with income levels of $150,000+ are choosing professionals to complete their home projects and the rest are seeking to combine professional help with DIY efforts. In comparison homeowners in lower income brackets reported that 49 percent would use a combined approach.

Of course, kitchens and bathrooms continue to rank as most popular in remodeling, about 48 percent of those surveyed planned a bathroom remodel, and 45 a kitchen overhaul. It is interesting to note that Midwesterners’ budgets for kitchen and bath remodels were most expensive, at $30,500 and $13,600 respectively, while homeowners in the South planned on spending less, about $23,800 and $11,600.

Got a question? We are available …